This makes me angry

This makes me angry 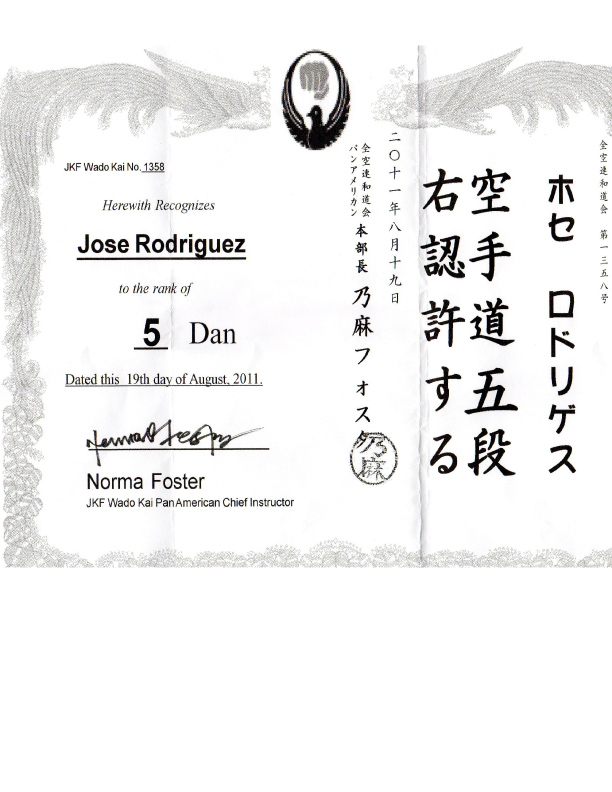 Some nice person is trying to get Norma Foster expelled from the Wadokai and forged a dan certificate with her as the signing authority.
The fraudulent document was mailed anonymously from Argentina to the Wadokai office.
I have attached a copy of the certificate.
As a member of the JKF Wadokai qualification examiner, getting caught issuing dan certificates is grounds for termination.

It has her signature (fake).
It has her hanko - real. They must have copied it somehow. She has used that hanko to stamp referee books in her capacity as a former WKF Referee committee member.
The dan certificate is signed by Norma Foster, JKF Wadokai Pan American Chief Instructor.
There is no such entity. What is interesting is that in the past 6 months or so we have been discussing the idea of creating a Pan American Wadokai and I suggested that Norma be the chairman. But this is still just a concept and we have been talking to several countries in the Pan American who is supporting this idea. But as of today it is still just a concept.

The dan certificate also pretends to have a JKF Wadokai registration number.
The Japanese is perfect which makes me suspect several Japanese instructors I know who are of dubious character.

So someone must have heard thru the grapevine what we were planning and decided to forge a fake dan certificate using her name.

The Wadokai immediately sent Norma a letter telling her that if this were true then she was in a lot of trouble. So Norma had to contact the president of the Argentina Karate Federation who helped her track down the point of origin in Argentina of the letter and so far as come up empty. They can't find a Jose Rodriquez.

Last year another group of nice people tried to get me expelled from the Wadokai for forging dan certificates among other issues. I had a full blown trial in Tokyo.
I was found innocent of all charges.

So last year they came after me. This year they came after Norma. Someone desperately wants us kicked out of the Wadokai. The charges against me were brainless and stupid just like my accusers and I know who they are. But this dan certificate against Norma is a bit more elaborate. Someone really took the time to make this thing look real.

We will find out who did it. So explain to me about this Wado ethos thing again? All I see are miserable fools (both Japanese and non Japanese) pathetically trying to live out their samurai fantasies and are being motivated by greed and/or delusions of grandeur.
Bob Nash
Top

It's one thing to be a phoney but quite another thing to commit a fraudulent act. Surely this has to be a felony in your neck of the woods gusei21.?

Unless they have changed a lot; it does not look like any Wadokai dual language diploma I have ever seen. Also, it says she is honbu cho which makes no sense in the context of the issuing authority and anybody who knows the Wadokai even remotely would know there is no issuing authority outside of Tokyo. The Japanese wording resembles that of a Japanese language Wadokai diploma, but is much different than the dual language ones--actually I have never seen a dual language one that was not vertical. Oh, and it very conspicuously bears no seals of Wadokai or any other organization.
All Blessings, C. Tak Kimura
Top

The other explanation, obviously, is that someone, somewhere came up with this scheme to make some money. Not necessarily to get Norma expelled or anything like that. But it's hard to tell...

In any case, it doesn't remotely look like JKF-Wadokai certificates I'm familiar with. Like Kimura says, if JKF-Wadokai certificate design hasn't changed, the forgery is very clear. I also wonder, considering original certificates have quite elaborate, gold plated printing, does this thing look and feel the same? Or do you only have a simple copy to go on? If it does look and feel the same, I'd be very worried because that should have taken quite a bit of effort.
However, if it is a copy, I would say this can't be any grounds for punishing Norma. I can't think of any court in the world (except perhaps North-Korea or Syria?) where a simply copy would suffice to judge anyone. It's just too easy. I could produce a copy of a forgery in 5 minutes. Do you care to be president of the world? Hang on a minute, certificate coming up...
Igor Asselbergs
http://kyudokan.nl/
Top

No one in their right mind is mistaking this for a WadoKai Dan certificate.
The issue is that someone forged Norma's name on A certificate.
It doesn't matter what kind of Dan certificate it is.
We are not allowed to sign any Dan certificate.
If we do we can get kicked out.
Someone pretending to be Norma signed it and put her hanko on it.
And someone then took the time to mail it from Argentina to the Wadokai in order to report her for the sole purpose of getting her into trouble.
Bob Nash
Top

Gusei21 wrote: We are not allowed to sign any Dan certificate.
If we do we can get kicked out.

But does that mean that if I send a copy of a dan grade to Tokyo tomorrow with your signature, you'll get kicked out? Haven't they heard of photoshop? Or scissors and glue, for that matter? Surely, it shouldn't be that easy to get someone expelled...
Igor Asselbergs
http://kyudokan.nl/
Top


Who else knew your were discussing this? Might lead you closer to the culprit, although you probabbly have an idea already.
Top

The thing that strikes me as odd is that Wadokai headquarters would even entertain the possibility of this being authentic. If someone sent me a clumsily forged TSYR menjo signed by a kai member of Norma's status, I'd laugh and throw it in the waste basket. A stunt this bone headed does not deserve to be taken seriously. It should be ridiculed and laughed at for the absurdity it represents.
Tobin E Threadgill
Takamura ha Shindo Yoshin Kai
http://www.shinyokai.com
Top
Post Reply
8 posts • Page 1 of 1